Where do birds turn, as the Klamath Basin’s wildlife refuges turn to dust? And where can the Basin’s public lands waterfowl hunters go, now that the historic flocks of migrating ducks and geese no longer have habitat to use at the refuges?

Thanks to multi-agency collaboration, a recently restored parcel of Oregon Department of Fish and Wildlife (ODFW) land along the Klamath River might just hold some answers for both waterbirds and recreators. The Klamath Wildlife Area was established in 1958, with Pittman-Robertson Act funds, for the purpose of protecting waterfowl habitat and providing public hunting access. The Wildlife Area consists of several units of state land, the largest of which is Miller Island, at around 2500 acres. Miller Island comprises several managed wetland features, interspersed by uplands, that provide a variety of habitat values for waterbirds like food and roosting. Although originally established for hunting, the Miller Island unit accommodates a variety of recreational uses and is popular for wildlife viewing.

With the help of the U.S. Fish and Wildlife Service (USFWS), the parcel was restored through the USDA Natural Resources Conservation Service’s (NRCS) Wetland Reserve Easement program and is open to the public for hunting and other recreational use. In 2019, the USFWS helped ODFW purchase the land from a private landowner who placed it in a WRE. Due to the perpetual nature of a WRE, the easement carried over to ODFW when it acquired the land.

Ariel Snyder, NRCS Oregon’s High Desert and Deschutes Basin Wetland Specialist, said that the NRCS engineered a restoration effort carried out in partnership with USFWS. The restoration effort aimed to transform what was once a leveled grain field into a thriving, riparian, semi-permanent wetland. They added microtopography like swales in which water can pool long after seasonal flooding subsides and mounds on which waterbirds can build nests. They finished the two-year restoration in the fall of 2022 by planting native wetland vegetation for wildlife forage and cover. Snyder said that the parcel has yet to see much bird use because plants are still getting established; however, flooding at the parcel due to its senior water rights showed the efficacy of recreating microtopography.

“Last winter, we were able to see some of those depressions holding water longer than the rest of the property,” Snyder said. “In a drought, this could be the difference that means there is wetland habitat for birds to use later into the season.” 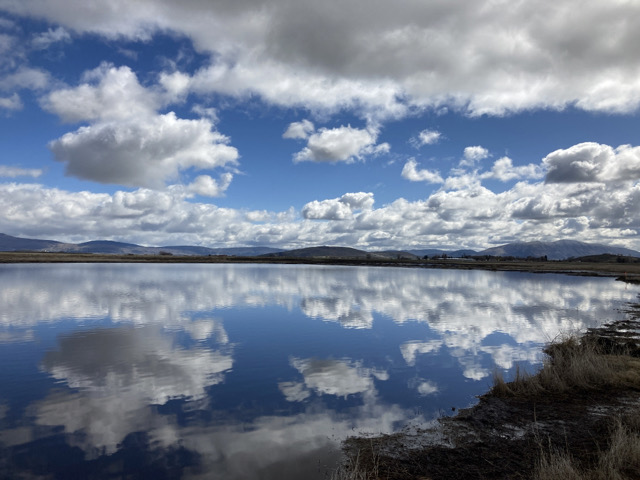 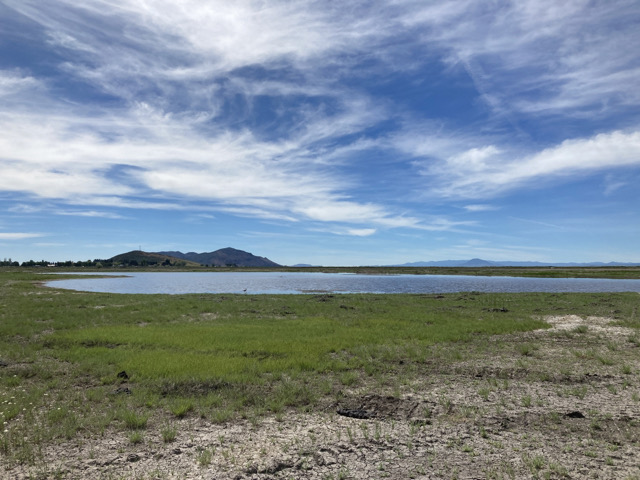 Images of the Miller Island WRE site, from April (left) and June 2022 (right). Both photos were taken after the topography features were completed, but prior to application of irrigation water, so the water pictured is from precipitation and potentially groundwater influence. Photos courtesy Ariel Snyder, NRCS.

Dustin Taylor, the Private Lands Biologist for the Klamath Basin NWR Complex, said that the goal of the restoration project was to bring back the riparian-adjacent wetland characteristics of the parcel. With wetlands disappearing rapidly across the Pacific Flyway, this is especially important. Taylor also said that ODFW’s outstanding track record of managing wetland habitat means the Miller Island project is set up for success.

“It’s ultimately going to be a really productive semi-permanent wetland,” he said. “This project supports the birds in the Flyway and provides some resiliency to the habitat we can provide in the Basin.”

Although restoration work is a typical part of the WRE program, Snyder said that the easement on Miller Island is otherwise unique. Most WREs are held by private landowners, meaning the wetland habitat they support is inaccessible to the public. Because ODFW holds this easement, public hunters and recreators are able to reap the full benefits of the wetland’s conservation. Josh Schmucker, the Klamath Wildlife Area Manager for ODFW, said that this access is especially poignant due to the parcel being obtained with funding from Oregon waterfowl stamp dollars.

“Oregonians who purchased bird stamps can now come out and hunt on this property that they essentially bought with their dollars,” Schmucker said. “That is a really, really cool aspect of this project.”

Ed Contreras, the IWJV’s Southern Oregon Northeastern California Conservation Delivery Coordinator, said that this is especially important for both birds and people as semi-permanent wetlands are in steep decline throughout the Pacific Flyway.

“In a year sportsmen and women can’t hunt Tule Lake and Lower Klamath National Wildlife Refuges because of habitat loss, the improved WRE unit on Miller Island is providing a new publicly accessible wetland,” he said. “Projects like this provide hope for restoring wetlands and waterbird habitat in the Upper Klamath Basin.”