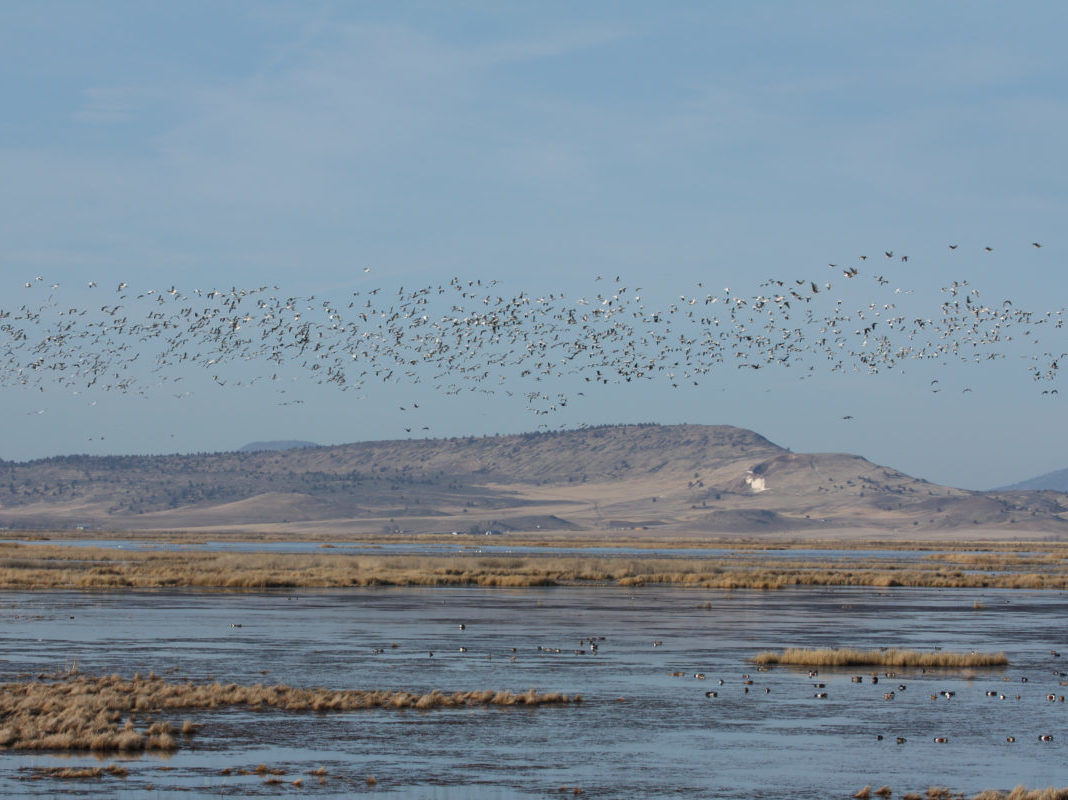 Snow geese and northern shovelers use a lake in the Southern Oregon-Northeastern California (SONEC) region.

In the Intermountain West, two landscapes stand out for their continental-scale significance to migratory birds: 1) the Great Salt Lake–Bear River watershed, and 2) the Southern Oregon–Northeastern California (SONEC) region. The North American Wetlands Conservation Act (NAWCA) program was signed into law in December of 1989 as a new continental conservation funding mechanism and has played a critically important role in these landscapes to catalyze conservation partnerships for the protection, restoration, and enhancement of habitats that sustain millions of birds. In celebrating NAWCA’s 30th Anniversary, the IWJV compiled the following story about the collective impact of NAWCA in one of our two highest priority wetland landscapes.

Throughout the arid Intermountain West, working wet meadow habitat is vital to migratory bird conservation. This habitat is created by traditional irrigation management practices that have been used for generations to produce forage and sustain ranching communities. Recent science and planning indicate that, in certain landscapes, these working wet meadows provide continentally important habitat for waterfowl and other waterbirds, and complement the habitat provided on State Wildlife Management Areas, National Wildlife Refuges, and other publicly managed wetlands. Yet, these working wet meadows are under significant pressure due to urban and exurban growth, altered hydrology, and other factors. In the SONEC region, the influence of NAWCA funds and partnership efforts is helping build resilience in the face of current conservation challenges that are pressuring working wet meadow ecosystems.

The SONEC region is a continentally important migration hub in North America that supports up to 70 percent of all wetland birds in the Pacific Flyway. It serves as a pivotal funnel for millions of waterfowl, shorebirds, and wading birds during fall and spring migration as birds move between primary wintering areas in the Central Valley of California and Mexico to breeding areas throughout the Pacific Flyway and the U.S. and Canadian Prairies. Publicly-managed wetland complexes in the region such as Klamath Basin and Malheur Lake National Wildlife Refuges provide critical fall migration and breeding habitat to millions of wetland birds when water availability in the region is lowest. Irrigated pastures and meadows on private working lands in the SONEC region provide important spring migration and early breeding habitat. Consequently, meeting the annual cycle needs of wetland birds in SONEC requires a holistic conservation approach across public and private land ownerships.

The NAWCA program has been a primary catalyst in SONEC to achieving this vision and addressing limiting factors for wetland birds using a partnership approach. In total, 30 NAWCA grants have been awarded to SONEC partners since 1991 reflecting $56.8 million in conservation fund leveraging and achieving over 167,000 acres of protection, restoration, and enhancement of priority wetlands and associated uplands across private, state, and federal lands. These NAWCA partnerships have protected wetland habitats from fragmentation; enhanced water, wetland, and agricultural wetland management capabilities to more efficiently use scarce water resources; and restored wetland function from impacts due to hydrologic alterations and invasive species. These SONEC partnerships have embodied the vision of NAWCA: they have built innovative private-public partnerships to leverage conservation funding in a strategic manner that has a continental scale impact for wetland-dependent birds in North America.