By Emily DowningPublished On: February 25, 2021

Of Ducks and Ditches: Infrastructure and Habitat in Colorado’s North Park

Come springtime in the West, ducklings motor around the irrigation ditches of ranching country like cars on a highway.  In Colorado’s North Platte Basin, these ditch-driving ducklings depend on the infrastructure provided by the ditches as much as the ranchers who use them to irrigate their fields. The ducklings cannot fly and must sometimes walk more than a mile to the nearest water source after they hatch. Some female ducks raise their ducklings entirely in irrigation ditches, and many of them use the ditches as transportation routes to bring their ducklings to the large reservoirs around North Park to feed.

For those who call North Park and the North Platte Basin home, ducks are a standard feature of the region. But the reason they come to North Park each year is the same reason most of the people are there: water. The tributaries of the North Platte River weave through Jackson County, irrigating hay fields in a way that mimics the natural flood patterns that used to occur before people dug the ditches. These seasonal flood events and the modern-day equivalent—flood irrigation—create temporary wetlands that foster the wetland plants and invertebrates that ducks feed upon during nesting. 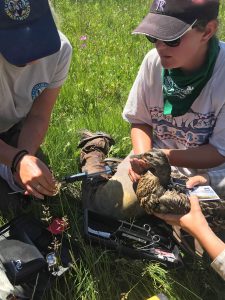 Small numbered bands are put on the legs of ducks and then reported when the bird is harvested. This tells researchers how many birds were shot and where, and makes a neat keepsake for hunters.| Photo by Ella Engelhard.

Today, it’s the basin’s ranchers that are the stewards of seasonal wetland habitat necessary for migratory waterbirds like ducks. Biologists responsible for healthy populations of waterfowl capitalize on this idea in their work with ranchers throughout Jackson County. If biologists can provide data that helps ranchers irrigate more acres or maintain the acres they already irrigate, the result is more habitat for ducks, ensuring that they continue to paddle North Park’s ponds and fill North Park’s skies.

Collaborating with private landowners on conservation actions and decisions on their land involves providing information, support, and financial incentives. Doing so can have wide-ranging impacts on the remaining wetland habitat across the Intermountain West. Incentive programs have allowed ranchers like John and Sharon Harvat to clear out structures that blocked water coming in from a local reservoir.

“Because we got more grant money, we’ve been able to irrigate in a short water year and still irrigate the full season, which makes a huge difference,” Sharon said.

But these incentive programs need data to prove their efficacy—and that comes from biologists. Researchers at Colorado Parks and Wildlife (CPW) and Colorado State University (CSU) in collaboration with Ducks Unlimited, Inc. (DU) have recently teamed up to study just what happens to ducks in flood-irrigated wetlands. Funded by the North Platte Basin Roundtable, these researchers are simultaneously looking for the answers to multiple questions: where ducks are nesting, how many of those nests successfully hatch ducklings, how many of the birds that are born in North Park go on to get harvested during hunting season, and whether flood irrigation benefits any aspects of the birds’ annual nesting season. Answers to these questions will guide biologists’ conservation efforts in North Park and will provide the scientific basis for funding future irrigation projects under the North Platte Basin Roundtable’s Basin Implementation Plan.

The Roundtable, a group of landowners, land managers, and conservationists, oversees all work involving water in the basin and funds projects related to irrigation. It also implements a basin-wide water plan to balance the myriad water uses within the watershed. The decisions of Roundtable members have real agricultural and conservation implications, from how many acres of hay a rancher can irrigate to whether the National Wildlife Refuge can flood ponds for waterfowl at certain points in the year.

So, each summer, a crew of CPW technicians under the supervision of Avian Research Leader, Dr. James Gammonley, and Avian Researcher, Dr. Adam Behney, count the number of ducks using hay meadows compared to those using ponds, creeks, and irrigation ditches on Arapahoe National Wildlife Refuge and several ranches throughout the area. The crew searches for nests using long ropes tied around the waists of two people, who walk through the wetlands dragging the ropes to flush birds off nests. The scientists also sample various wetlands throughout North Park for insects and other waterfowl food items to see which water bodies produce the most food for their feathered focal species. Finally, they attach small numbered leg bands and GPS devices to some of the birds to watch where the ducks are going and figure out when and where they are shot by hunters. So far, the crews have searched over 3400 acres for duck nests, which ends up being almost 1200 miles walked in the quest for nests. 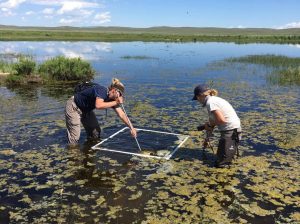 Technicians sample a wetland for duck food. Ducks primarily eat invertebrates during the summer when they need the extra protein for laying eggs.

Ultimately, this research has the potential to focus the limited financial resources in the conservation world on the habitats and projects that provide the biggest bang for their buck in terms of both waterfowl and agricultural production. Programs that incentivize ranchers to work with conservation organizations like Ducks Unlimited get their start by determining whether it is beneficial to wildlife when irrigation projects receive subsidies—and it’s research like this that provides the answers.

Science is the foundation upon which incentive programs are built, and can be translated into conservation actions that benefit agricultural producers and wildlife.

“I believe that cows can coexist with wildlife, and if land management practices benefit both that’s a wonderful thing,” said Sharon Harvat of the research occurring on her property.

In addition, wildlife managers can use the information gleaned from studies like this across the western United States to improve waterfowl habitat and preserve our natural resources for hunting, a more diverse ecosystem, and the hope that ducklings will keep paddling their way into the future.