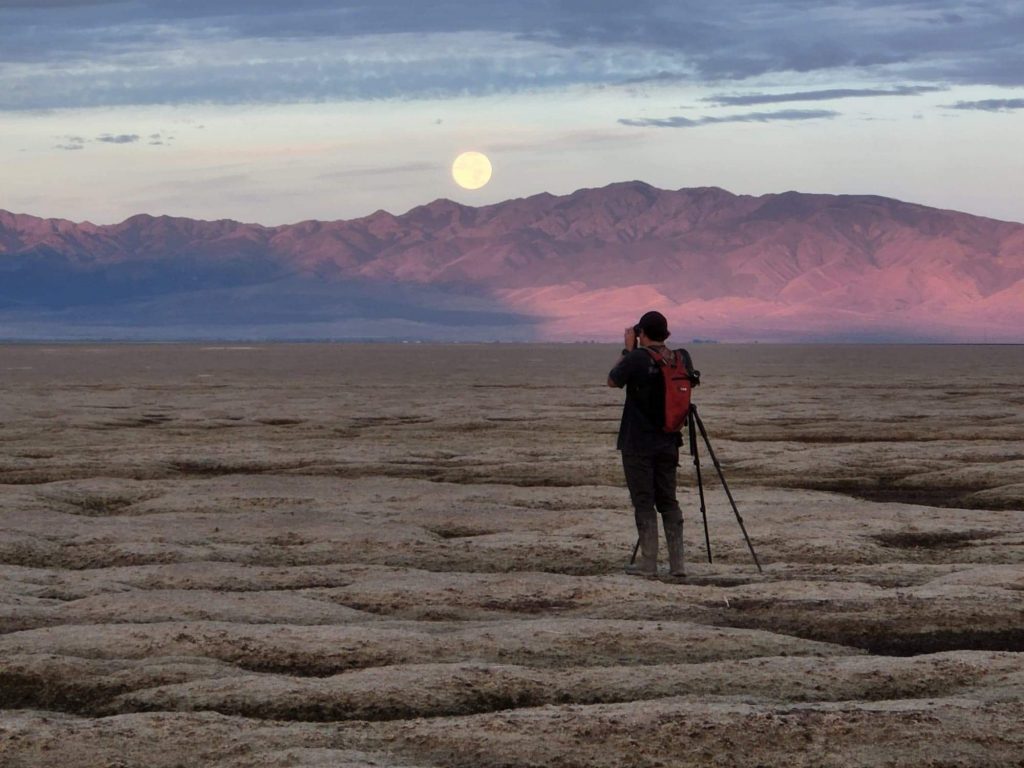 This past August, hundreds of volunteers, non-profit biologists, and state and federal agency staff grabbed their binoculars, spotting scopes, and bird identification guides to do something that hadn’t been done in almost three decades: count migrating shorebirds across the Intermountain West. This massive mobilization of surveyors set out to visit as many wetland sites as possible from August 9th to August 22nd in an attempt to help fill in important data gaps relating to shorebirds and their vulnerable habitats.

Seven of the 38 shorebird survey sites that historically held more than 1,000 shorebirds per year were completely dry in August of 2022.

The snowmelt-fed wetland habitats of the Intermountain West play a critical role in supporting over 30 species of migratory shorebirds that use the Pacific Flyway, such as Dunlin, Long-billed Dowitchers, and Western Sandpipers. As they migrate south from their breeding grounds in Siberia, the Arctic, and parts of North America, shorebirds have to stop, rest and refuel before heading to their wintering grounds on the Pacific Coast and interior portions of Central and South America. The wetlands of the western United States act as oases for these birds, and for millennia, shorebirds have funneled to these irreplaceable habitats twice a year during spring and fall migration.

Over the past few decades, the American West has endured significant climate change effects. It has been the epicenter of a multi-decadal mega drought, raging wildfires, and record-setting temperatures. As these impacts hit us harder each year, a big question remains unanswered: How are these changing environmental conditions affecting shorebirds and the wetlands on which they rely? 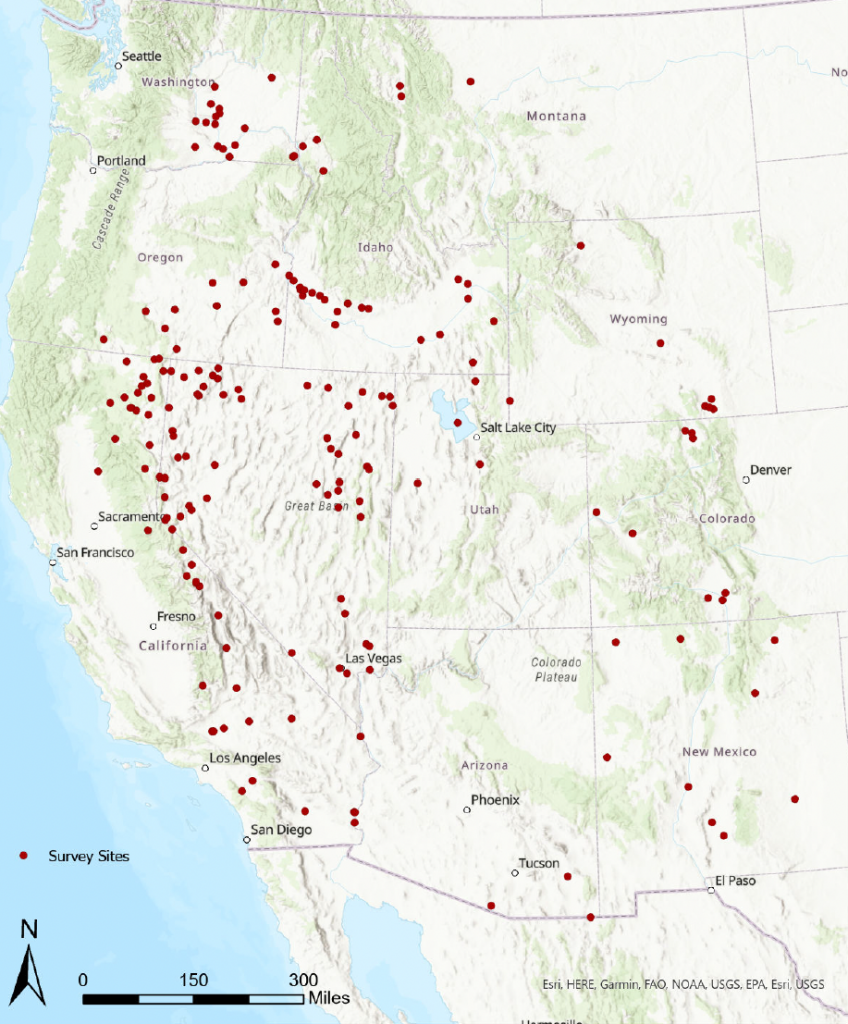 Regional shorebird survey locations. Surveyors reached 110 of the 162 sites during August 2022; additional sites will be surveyed in spring and fall 2023.

Stopover Habitat the Focus of Survey

For years, there have been a number of large-scale shorebird monitoring efforts throughout the flyway that have focused on wintering populations of shorebirds, and to a lesser extent breeding populations. One portion of their annual cycle is particularly lacking in recent data: their migratory stopover habitat.

From 1989 to 1995 Point Blue Conservation Science (then known as Point Reyes Bird Observatory) spearheaded an effort to monitor 162 wetland sites in the Intermountain West for shorebirds during peak spring and fall shorebird migration. This monumental effort yielded amazing insights into shorebird populations and the distribution of key habitats and food resources, and the study is still referenced to this day. Therein lies the problem: data from over 30 years ago still informs how we talk about shorebirds and their habitats in 2022. Conditions have dramatically changed since that time, and the need for updated information is more important than ever.

Over the course of 2022, National Audubon Society’s Saline Lakes Program (Audubon) and Point Blue Conservation Science teamed up with the U.S. Fish and Wildlife Service, state wildlife agencies, Audubon chapters, and other non-profit organizations to revisit these historic surveys. After months of coordinating, recruiting, identifying wetland sites, and performing reconnaissance, this effort culminated in surveys of over 110 wetland sites, all within a two-week window in August.

These surveys are not only a snapshot of shorebirds during their fall migration, but they also provide a picture of the condition of these wetland habitats. The initial results demonstrated that the critically important shorebird sites identified thirty years ago are still important when fresh water is present, but they are suffering due to drought and increasing regional aridity. In fact, seven of the 38 shorebird survey sites that historically held more than 1,000 shorebirds per year were completely dry in August of 2022.

Although this year’s survey provides just one data point, fall and spring surveys will continue for the next three to five years as the program grows. The results will help guide water management across the West.

This survey was conducted with the help of many partners and is always looking for more volunteers and supporters. Contact Blake Barbaree bbarbaree@pointblue.org for more information.

Notes from the Field

Flip the boxes to learn about surveys in Utah, Nevada, California, and Oregon.

The surveys came together without a hiccup, but the conditions, especially at the Great Salt Lake, were frightening. This year’s scorching weather in Northern Utah compounded the effects of the drought with the Great Salt Lake reaching its all-time record low for the second consecutive year. Surveys were challenged by the weather, which, despite a sunrise start and some scattered clouds, saw temperatures quickly soar into the mid-90s. Declining lake levels made for difficult walking through miles of microbialite fields. These fields are an integral part of the Great Salt Lake ecosystem that, as they become exposed and lifeless, put brine flies, brine shrimp, and the birds that rely on those food sources at risk.

Low levels at the Great Salt Lake also made planning for the surveys difficult. Historic surveys in the late 80s and early 90s occurred when water levels were much higher. In places where an airboat used to simply skim along the shoreline and count birds, shallow water and dry lakebed made this impossible. These areas, now inaccessible by boat, had to be covered by airplane, ATV, or by foot.

Utah Surveys at a Glance

99 participants at 60 unique survey sites across the state.

31 species of shorebirds, including some rarities (Red Phalarope, Hudsonian Godwit).

Over 228,000 shorebirds.  Some of the highest species counts follow:

When it comes to shorebird surveys, Nevada is one of the most difficult states to tackle in the Intermountain West. As the driest state in the country, at a first glance seems like it would not have much habitat for shorebirds. Although that may be true for the overall acreage of habitat, Nevada has the highest number of shorebird sites of any of the 11 western states (56!), and most of them are remote from the relatively small pool of surveyors who live mostly in the western and southern parts of the state. Despite those challenges and with special thanks to Lahontan Audubon Society (Reno), Red Rocks Audubon Society (Las Vegas), Bristlecone Audubon Society (Elko), the Nevada Department of Wildlife, and US Fish and Wildlife Service staff, partners were able to visit over 40 sites in Nevada. The participation this August was awe-inspiring, especially given the conditions throughout the state.

The lack of water in Nevada was beyond what any of us could have fathomed. Of the 40+ sites visited, almost half (18) were completely dry or had small pockets of spring water. During the survey window in Eastern Nevada, we spent a week visiting a dozen historic sites, nine of which were difficult to imagine ever having held shorebirds.

Nevada Surveys at a Glance

Over 30 participants covered over 40 sites across the state.

A significant number of historic sites were completely dry, or limited to small springs.

Lahontan Valley had higher numbers than all other sites combined with over 13,500 shorebirds. Some of the highest species counts are as follows:

The regional surveys kicked off at the Salton Sea, where extreme heat ended surveys ended by 11 a.m. They concluded with confirmation that many key sites were completely dry or nearly dry. Honey Lake, Goose Lake, and the Upper/Middle/Lower Alkali Lake complex—all very important shorebird sites 30 years ago—were all completely dry. Lake Abert dried up entirely only a week after the survey was conducted. Both Tule Lake and Lower Klamath National Wildlife Refuges had only small pools of water remaining and less than 300 shorebirds combined.

The Salton Sea and Mono Lake were the only sites with more than 10,000 shorebirds counted. Other sites had counts in the range of 0 to 8,000 birds.

In two weeks of travel across eastern California and southern Oregon, it was difficult to find any shorebirds due to this drying, as well as due to changing land use across the region. However, there is a spot of good news: we also discovered new sites holding shorebirds that did not exist 30 years ago, from wastewater treatment plants to groundwater recharge basins. Sites like these may hold greater importance for shorebird populations as we face a drier future.