By Emily DowningPublished On: October 2, 2021

Sagebrush Ecosystem Team: Bringing Science and Partnership to the Table 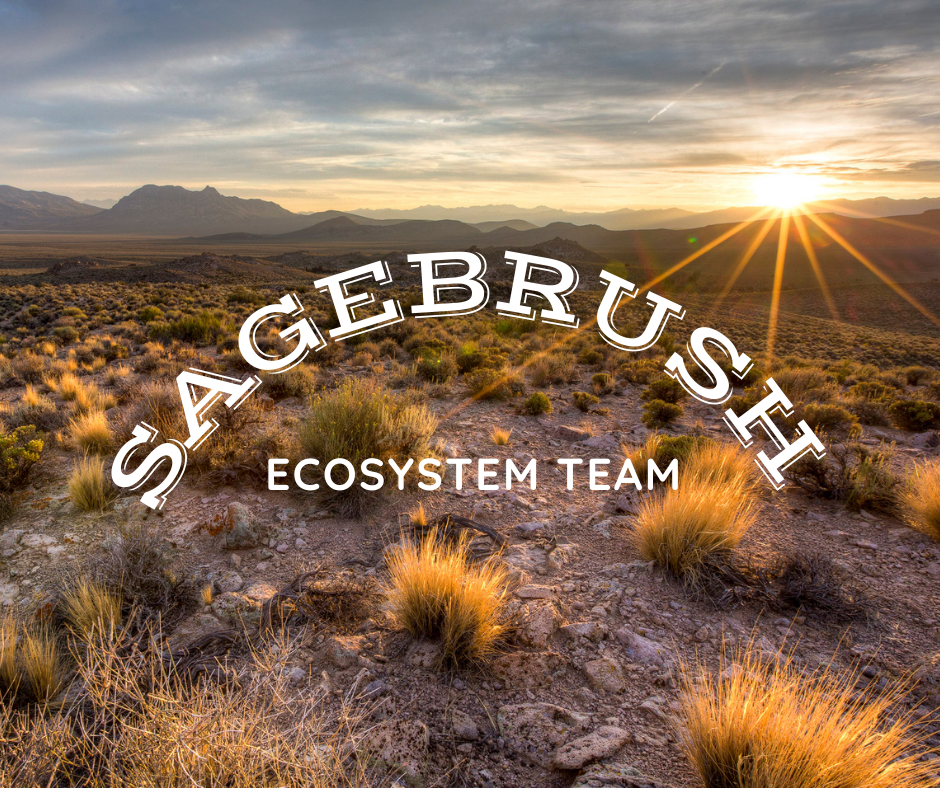 In 2019, the USFWS Mountain-Prairie Regional Director for Interior Region (IR) 5/7 established a strategic effort to work across programs and partners to maintain healthy, working landscapes that support native wildlife, climate resilience, and rural economies. Ever since, the Sagebrush Ecosystem Team (SET) has been hard at work creating an innovative model for landscape-scale conservation into the future. Their efforts earned them the 2021 IWJV Science Conservation Award.

SET brings the latest USFWS sagebrush, migratory bird, and science application expertise to its work. Using a strategic framework, SET identified priority sagebrush-dependent migratory bird species such as the Sagebrush sparrow, Brewer’s sparrow, and Sage thrasher. Through this framework, the SET established population objectives for these species and built a suite of conservation design tools to target conservation actions aimed at addressing primary threats to these species—such as invasive annual grasses and conifer encroachment—and their habitats. Working with partners like the Western Association of Fish and Wildlife Agencies (WAFWA), the IWJV, and others, SET directed investments, promoted accountability, and aligned closely with the Administration, Department of the Interior, and regional priorities, accelerating and serving as a blueprint for cooperative large-landscape conservation.

Through the SET, USFWS has also established a new cooperative agreement with WAFWA and the IWJV to advance priority sagebrush science, such as an economic analysis of invasive annual grasses.

In addition to science investments, the SET is working closely with WAFWA and other partners to broaden the scope and application of USFWS’ sagebrush conservation design effort. Along with their partners, SET convened a collaborative Conservation Design and Prioritization Work Group to create a blueprint that leverages a diverse set of spatial data and spatially-explicit conservation delivery mechanisms to better coordinate multi-agency conservation delivery across the sagebrush ecosystem. Having a grounding of past experience in landscape-scale collaboration, meaningful relationships with key partners, and a framework of data based on USFWS’ SHC work enabled the SET to quickly identify important areas for partner discussion, moving the Conservation Design effort forward in support of state and partner priorities.

SET members have also worked to identify sagebrush conservation “success stories.” By sharing successes, the SET creates visibility, credibility, and clarity around the value and application of sagebrush conservation. As an example, the recently published “Southwestern Montana: A Geography of Sagebrush & Hope” shares how a group of ranchers and small business owners, together with the State of Montana and federal agencies, local conservation districts, and non-governmental organizations came together around coordinated sagebrush restoration and rangeland health projects in the region. Moving beyond investing in science and conservation by highlighting examples such as the Southwest Montana Partnership lets audiences know the SET is committed to what they say based on real stories and real results.

San Stiver, the Sagebrush Conservation Initiative Coordinator for WAFWA, nominated SET for this award, saying that SET members have demonstrated important values of partnership, trust, and relationship, as well as a commitment to actionable science that is relevant to managers and partners across sagebrush rangelands.

“Their success is creating an important pathway for multiple other proactive partner-driven science and tech transfer projects in FY22 and beyond,” he said.