By Emily DowningPublished On: September 1, 2020 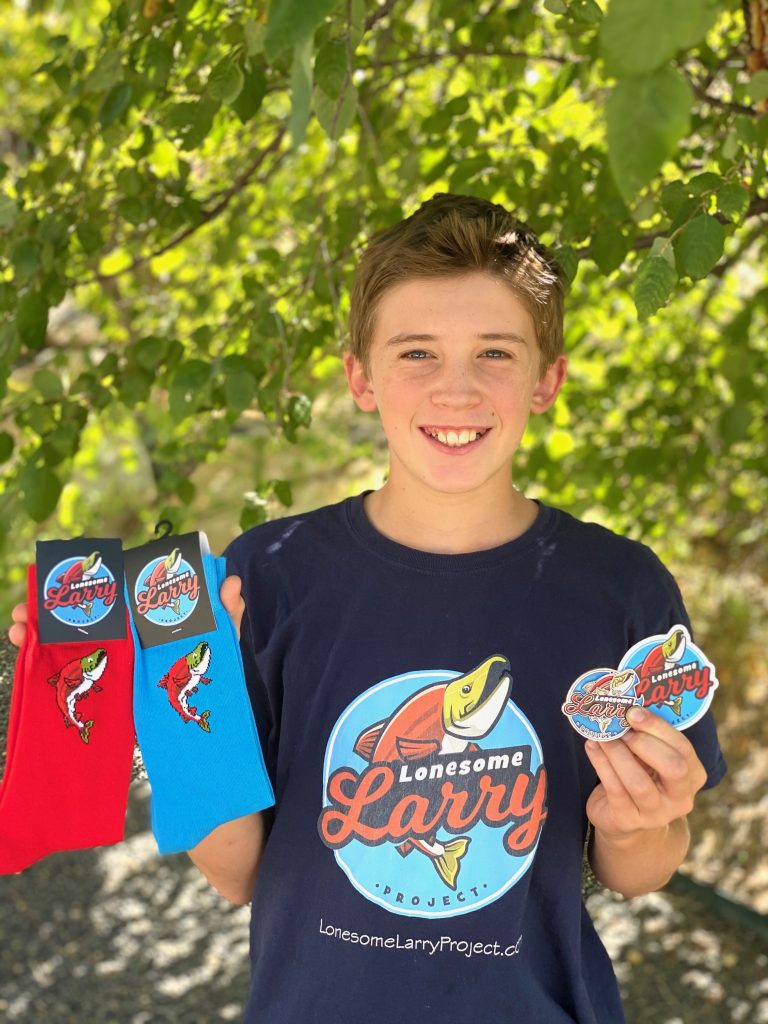 During a 2019 summer vacation with his family, Topher Jones learned about Lonesome Larry, the only Sockeye Salmon to return to Redfish Lake in 1992. He decided he wanted to do something to help Idaho’s fish and habitat, so he and his family created the Lonesome Larry Project (LLP) to raise money to save Idaho’s Sockeye Salmon and other endangered fish and fish habitat in the West. He came up with the idea to design and sell socks with a Sockeye Salmon design: he became the “Sock Guy for Sockeye.”

Topher seeks out unique opportunities to sell socks, such as the Idaho Steelhead hockey games, local coffee shops and even the MK Nature Center. He has made every effort to learn what it takes to properly market and sell a product from the ground up. He listens to feedback provided by customers and partners. Sometimes this feedback is not always positive; Topher processes that information and has had to make decisions on the way he feels best to move forward. Topher’s biggest goal is just to help the Sockeye; he hopes that each and every year the Lonesome Larry Project grows and he can fund larger projects.

In the last eight months, the LLP raised over $10,000. These funds are being held in the LLP Fund at the Idaho Fish & Wildlife Foundation (IFWF) and will be applied to a special grant application in the 2020 IFWF competitive grant cycle specifically for fish restoration and fish habitat restoration projects. Topher will also have the opportunity to review and rate those projects that apply for funding; this will allow him to make the connection between the funds that he has raised and the work being done in his community.

Topher is frequently sought out for interviews by local media, which allows him to reach a broader audience and raise more funds through LLP. He was also recently introduced to the Deputy Director of Idaho Department of Fish & Game (IDFG), who was in charge of the Idaho Sockeye Program at one point in his career. Topher took that opportunity to ask questions about sockeye and their importance in the ecosystem and Idaho.

Topher has provided leadership to people of all ages through the Lonesome Larry Project. His passion for making a difference for future generations is evident in all of his activities. Topher and his “crew” hosted booths at the local Idaho Steelheads home games to sell socks and educate visitors about his goals. Topher is an inspirational youth at all levels, not only because of his can-do attitude but because he saw a need and developed a plan to play a role in helping to solve the problem.

Furthermore, Topher’s public persona has brought the issue to light for many younger people around the state. Topher does not hesitate to step up for an interview to talk about the Lonesome Larry Project and what he hopes the funds raised will do to help the salmon. As one Facebook commenter noted, “We all talk about doing something. This kid is actually doing it.”

Topher was nominated for this award by Hilarie Engle, the Idaho Fish and Wildlife Foundation Executive Director, and Sharon Kiefer, the Idaho Department of Fish & Game Communications & Marketing Bureau Chief.