A Sagebrush Sanctuary in Wyoming 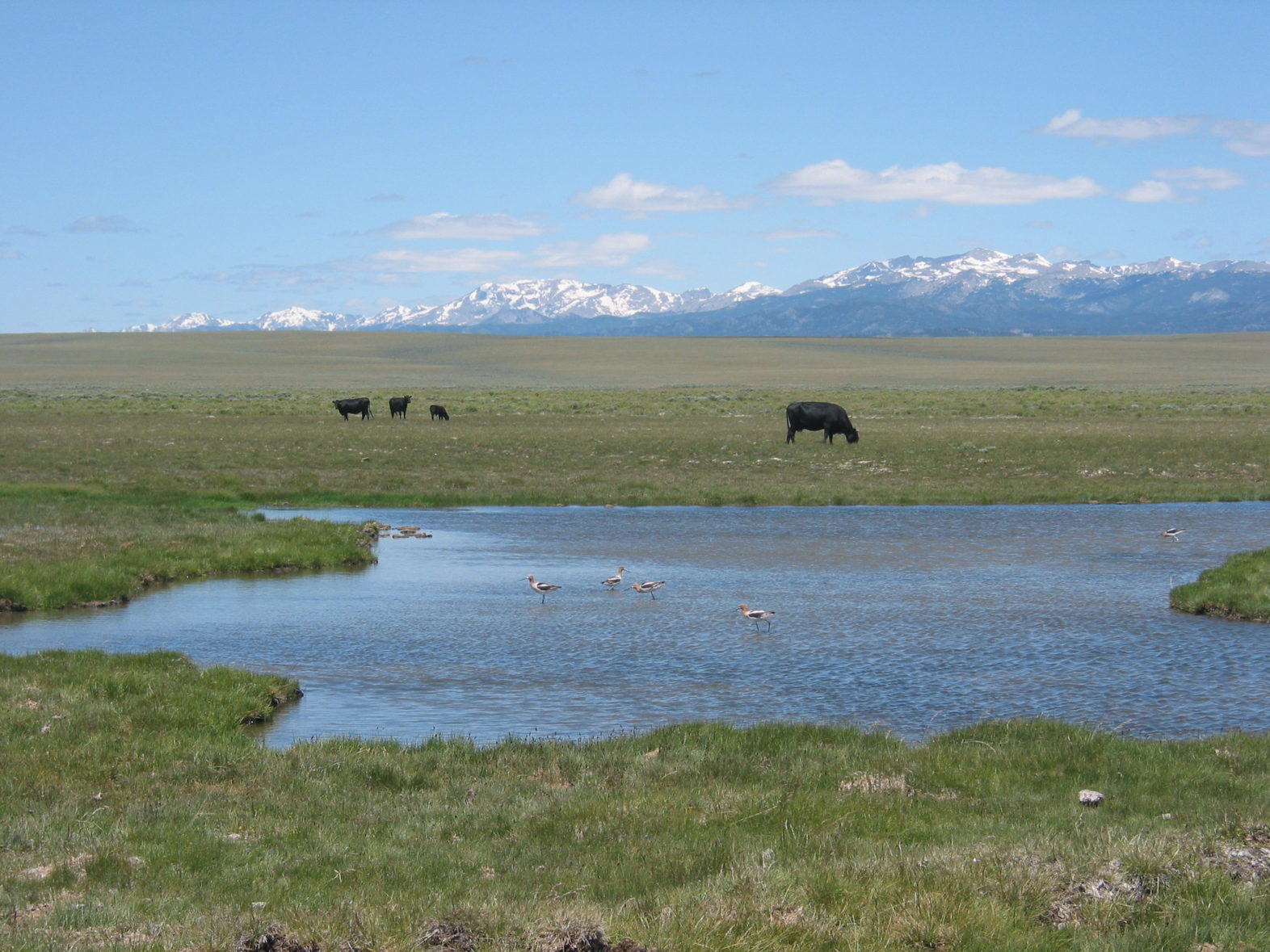 This article is a partnership production of U.S. Fish and Wildlife Service’s Partners for Fish and Wildlife Program—Mountain-Prairie Region and Intermountain West Joint Venture. Click here to read all four stories in this series.

Not far from Lander, Wyoming, wagon wheels once wore grooves along the Oregon Trail. The historic route, which snakes through a portion of Burnt Ranch, the headquarters for Hellyer Ranch, is a reminder of the ever-changing landscape—and one that the Hellyers have witnessed first-hand for nearly 50 years. Long-time Wyoming residents, the Hellyers purchased the first part of their ranch in 1972 and, over the years, have continued to add property at the south end of the Wind River Mountain Range. Today, they raise grass, alfalfa hay and Black Angus cattle all while keeping a watchful eye over the Sweetwater River that traverses the ranch with its green ribbon of riparian habitat and scattered wetlands making up the heart of their rangeland.

Their property is home to moose, elk, “antelope and deer that won’t quit and all kinds of birds and fish,” says Rob Hellyer. In the heart of the sagebrush sea, their ranch is vital not only to a robust population of sage grouse, a species that has seen significant range-wide declines, but a host of other species like pygmy rabbits, sage sparrows, sagebrush voles and Brewer’s sparrows that depend upon this unique ecosystem. Landscape changes across the West make the Hellyers’ conservation focus crucial to the vitality and future of sage grouse, once considered near threatened, and many other sage-dependent species.

“Wyoming’s vast expanses of sagebrush contain nearly 40% of all known sage grouse in the world,” says Mark Hogan, U.S. Fish & Wildlife Service (FWS) State Coordinator for Wyoming Partners for Fish and Wildlife (PFW) program. “That ranch is part of an area known as the Golden Triangle, which contains the largest concentration of sage grouse in Wyoming.”

PFW works with private landowners on a voluntary basis to restore and enhance habitat for Federal Trust Species while supporting working lands. By partnering with PFW, the Hellyers received both technical and financial assistance to complete specific projects on their land—most of which targeted rangeland health to help ensure both a long-term sustainable livestock operation and fish and wildlife that rely on these areas.

“They’re very easy to work with,” says Rob Hellyer, “And it’s quite enjoyable working together, especially with Mark.” Together, the Hellyers and PFW have installed solar-powered, wildlife-friendly, electric fences along the banks of the Sweetwater River as well as half a dozen solar-powered water systems to better disperse livestock throughout the ranch. By practicing seasonal grazing and, with the completion of these projects, the Hellyers have created several large riparian and upland pastures to allow for the rotation of livestock within the 94,000-acre parcel, resulting in improved rangeland, riparian and wetland health.

“You have to manage the water, the riparian areas, efficiently,” says Rob Hellyer, who credits strong relationships with programs like PFW, Natural Resources Conservation Service, the Wyoming Game and Fish Department, the Wyoming Wildlife and Natural Resource Trust, Ducks Unlimited, and local grazing boards to provide a thriving landscape for both wildlife and cattle. “Everybody wants to use the water – the wildlife, the cattle, the birds. If you don’t manage for certain types of vegetation, especially vegetation that supports birds like sage grouse, then you could have problems.”

“Controlling the grazing is the most important part,” adds Hellyer. “We might fence the riparian area and use it part of the year and, when those areas are fenced off, we use a solar pump nearby to take some water from that riparian area to provide an alternative water source.”

Hogan notes that project monitoring is a condition of the program and helps track improvements and trends over time. “It’s become a necessity for managing range units of mixed ownership,” he says. Martha Hellyer has overseen their conservation projects for years now and, according to Hogan, “if you want to know the status of the rangeland health, just ask Martha.” The Hellyers do this through annually reviewing permanent plant transects to help guide management decisions and making note of insects, birds and other wildlife using the area. Since completing these projects along with new spring development and river restoration, there’s been an influx of wildlife using the areas, which Rob Hellyer says is due to how carefully they’re managed. As for future projects, Hellyer says he has plenty of ideas and plans to continue his relationship with PFW and other organizations to further these habitat improvements.